The article addresses the multi-faceted economic impact of the pandemic on marginalized communities and explores possible assistance paths from the Malaysian government, NGOs, and civil societies. From foreign nationals, undocumented migrants and stateless people to indigenous communities, almost all underprivileged sections of the country are going through significant financial crisis. As a result, many are unable to even afford basic necessities such as food. To counter this, private players such as Grab and Instapay Technologies have devoted initiatives towards helping the disabled, low-income communities. Government has also announced a number of stimulus packages to support marginalized groups and to strengthen the economy as a whole.

With lockdowns to curtail the spread of the virus, the COVID-19 pandemic has sent virtually every country into an economic recession in 2020. In Malaysia, the Movement Control Order was implemented on 18 March 2020 which lasted 2 weeks. However, this was just the beginning. It would be followed by a series of movement restrictions and people were not allowed to leave their houses (with a few exceptions) for long periods of time. It was a difficult time for most, but the government helped its citizens along with several government aid packages. The focus of these aid packages, however, was solely on its citizens. Malaysia is home to many foreign nationals and many of the foreign workers are undocumented, while most refugees are illegal immigrants. This marginalized community received little to no help and were severely hit by the pandemic.

Many foreign nationals lost their jobs during the pandemic which led to a sudden halt in their income. Undocumented or illegal immigrants in Malaysia generally earned a daily wage (as they were employed informally), so they lived from day-to-day with minimal savings. Without any financial assistance, these foreign nationals struggled to afford even basic necessities such as food and water. According to Relief Web, 64% of the Rohingya and Bangladeshi respondents experienced a loss of income. 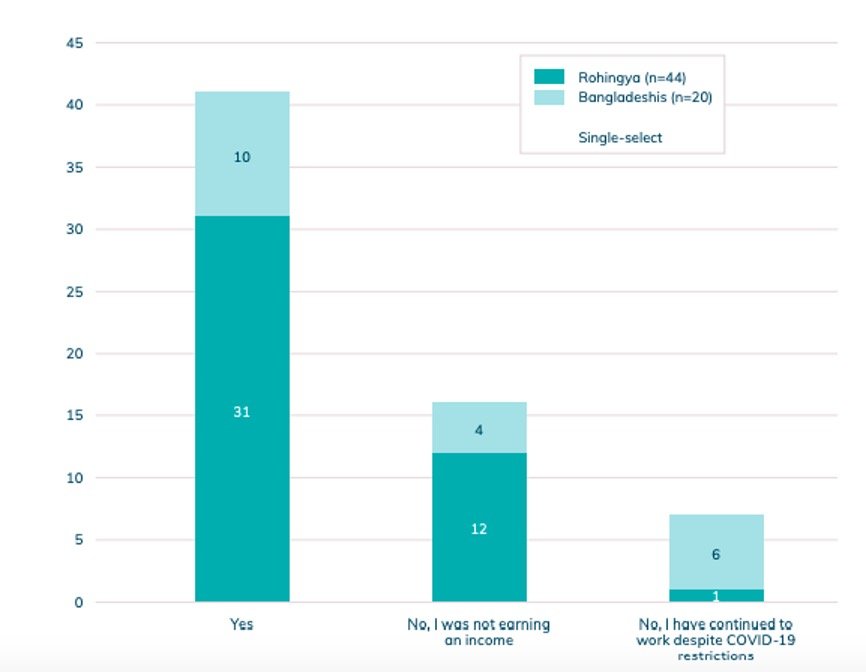 The losses of income hampered the migrant community’s ability to afford basic goods and housing. Rohingya respondents had a larger loss of income compared to Bangladeshis, which is possibly due to their differing migrant status and the jobs that they are able to attain. 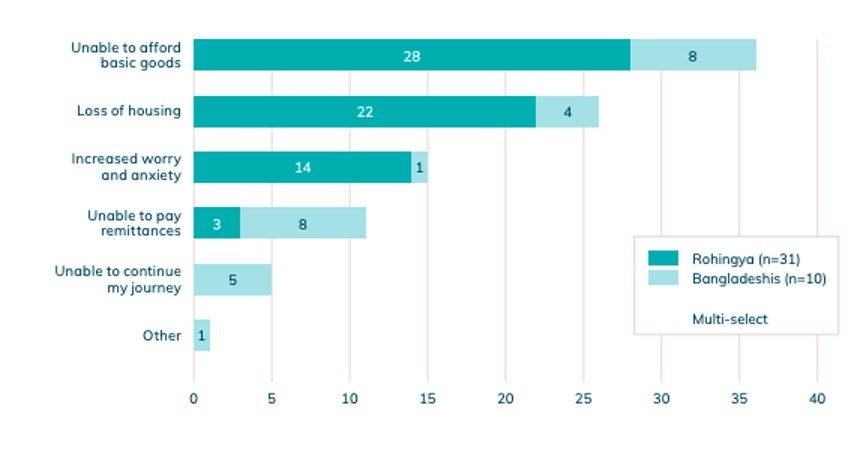 There are a number of stateless people in Malaysia as well for several reasons; firstly, women and men are not granted the equal right to confer nationality on their children. Malaysian women are not able to confer their nationality onto their children if they are born abroad, unlike Malaysian men. Thus, Malaysian women have to apply for citizenship for their children and this application can take years to process. There are several other groups who are stateless, like the Bajau Laut, who reside in Malaysia. They face the same problems that foreign nationals face, being excluded from government aid and mostly earning daily wages.

The indigenous groups, like the Orang Asli, are also struggling from the pandemic. The Orang Asli mainly stay in the forests of Malaysia, away from the cities. Out of fear of contracting COVID-19 and a lack of knowledge about the virus, they built barricades to prevent outsiders from entering their village. 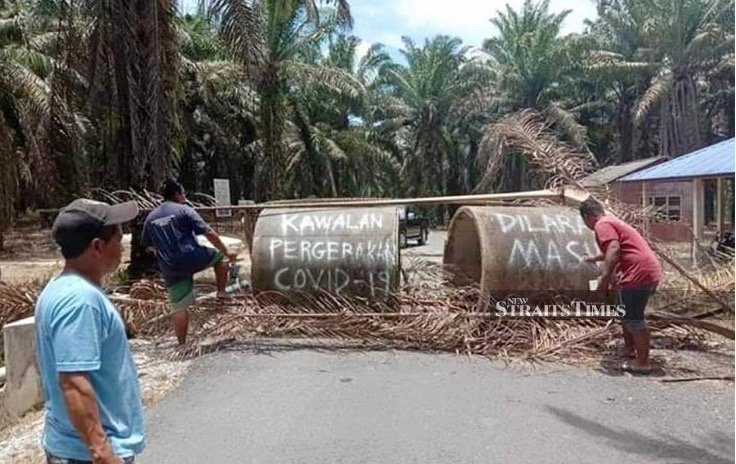 This is detrimental for them because it is now harder for the government and NGOs to provide help directly. Some NGOs help by depositing money in bank accounts, but with the MCO and their fear of entering the city, they are unable to withdraw this money. Some villages are not registered with the government and NGOs as well, which means that they are excluded from any help provided. The halt to economic activity has also hampered demand for the goods produced by the indigenous groups, like turmeric, prawns, and lemongrass — reducing the already extremely small incomes of these communities.

For women in marginalized groups, the pandemic has restricted their access to menstrual products. This is because menstrual products, despite being a necessity, are often disregarded as one. With their limited income, menstrual products have become a “luxury” and women may be more susceptible to infections from the lack of proper hygiene. This phenomenon is known as “period poverty”.

As a whole, marginalized communities in Malaysia are struggling the most but ironically receive the least help from the government and other sectors. So what can be done to help them?

What can be done by various sectors?

The Government has announced various stimulus packages over the months, with the latest being a RM20 billion package including cash transfers to marginalized and vulnerable communities. However, there seems to be an overwhelming space wherein much more could be done for the optimum welfare of these communities. Let’s take a look at different sectors that can play a pivotal role in uplifting vulnerable communities in Malaysia.

Thus, reaching out to such communities is oftentimes a challenge for civil society and welfare organizations. A clear communication channel from both ends, powered by a well running medium and a hassle-free system, which includes minimal bureaucracy can form a strong base for faster assistance to marginalized groups. This may be possible through a synchronized effort by the government and civil society. 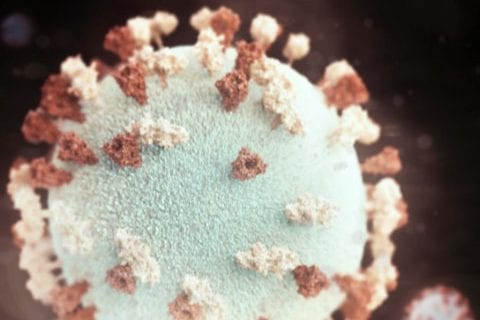 The UNU Evidence, Policy, and Interventions for COVID-19 Tracker (UNU EPIC Tracker) is an... 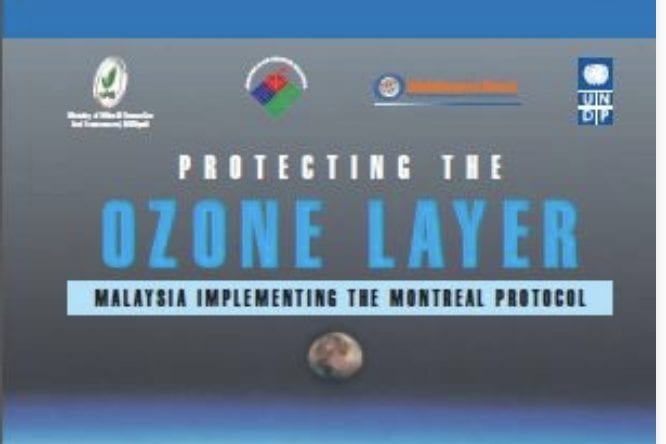 Malaysia’s success in implementing the Montreal Protocol can be seen both in declining imports... 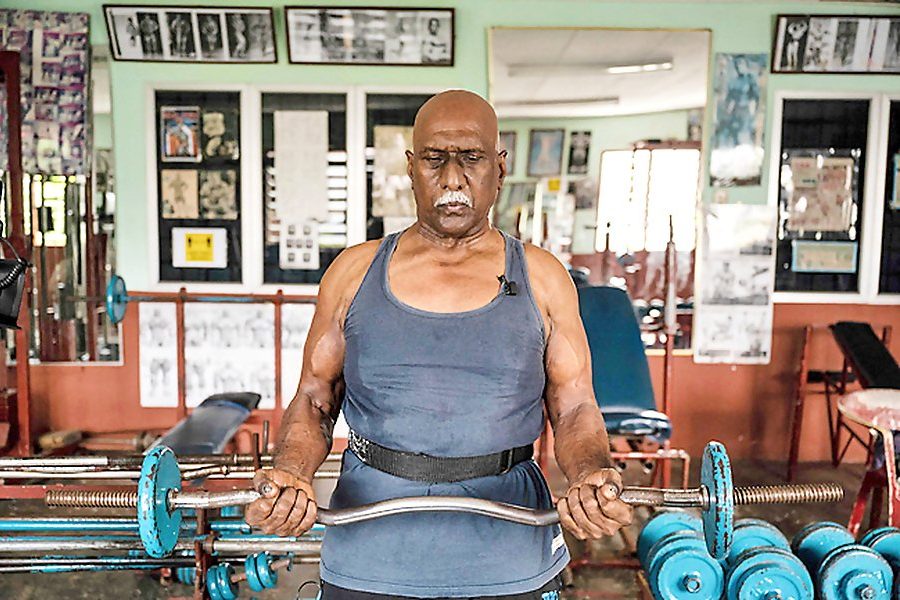 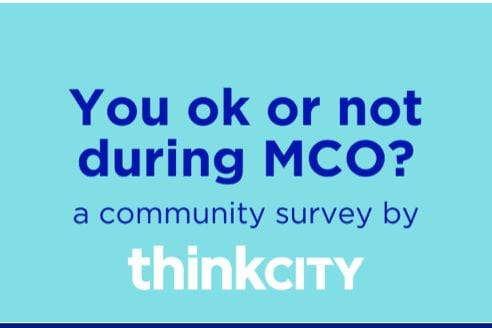 You OK or not during MCO?

A community survey by ThinkCity on how Malaysians fare during lockdown.